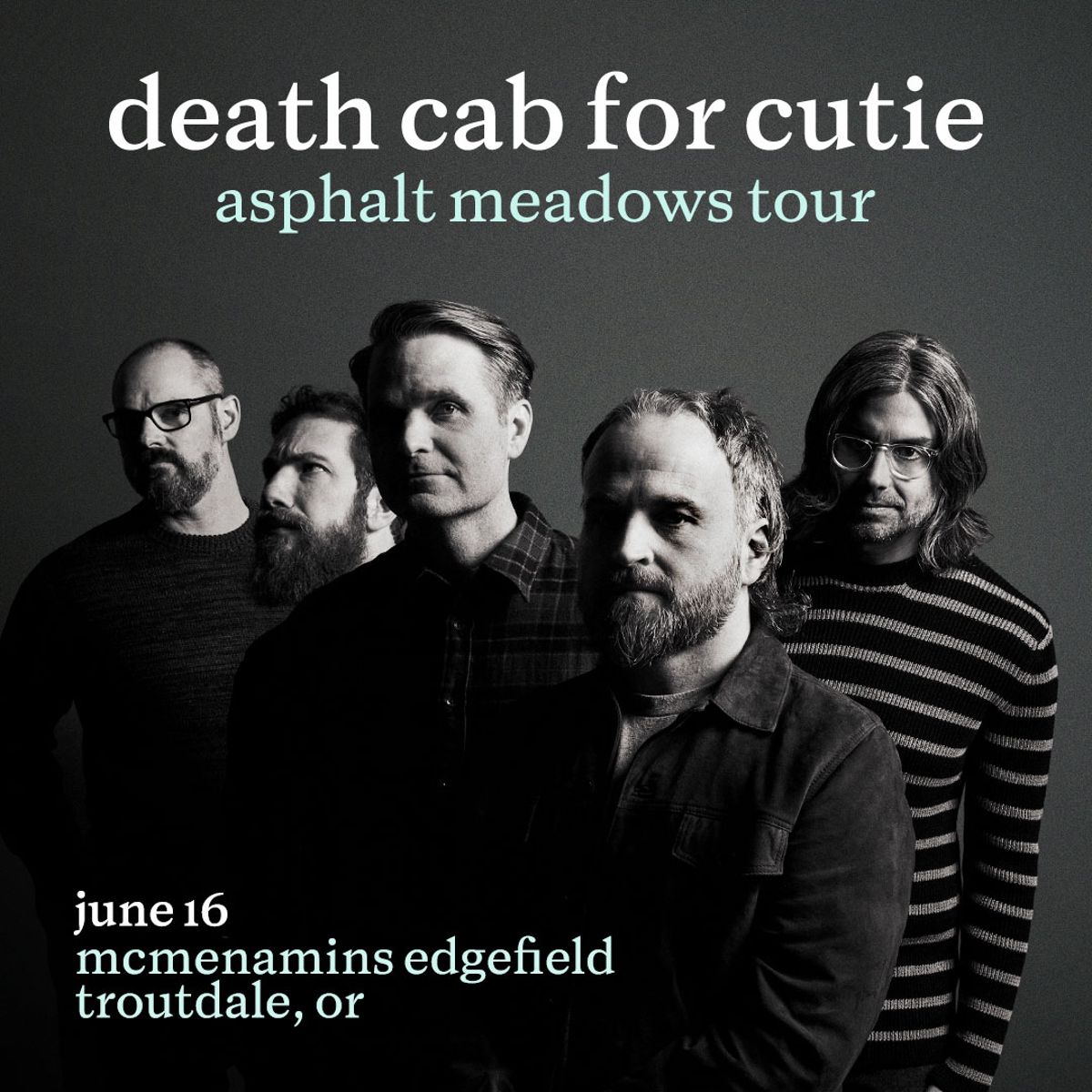 Combining sensitive songwriting, memorable melodies, and the rich, wistful vocal tone of its leader Ben Gibbard, Seattle’s Death Cab for Cutie quickly rose from a low-key solo project to become one of the definitive indie bands of the 2000s and 2010s. Then based in the bayside college town of Bellingham, Washington, Gibbard had a minor breakthrough in 1997 with his debut cassette, You Can Play These Songs with Chords, prompting him to put together a band that included the cassette’s producer, Chris Walla. After marrying grungy rock and bittersweet indie pop for nearly a decade, their 2005 major-label debut, the more polished Plans, propelled Death Cab for Cutie into the Top Five behind the Hot 100 single “Soul Meets Body.” They followed it with another hit song, the ballad “I Will Possess Your Heart” from 2008’s Narrow Stairs, which went all the way to number one on the Billboard 200. (Both records were also nominated for Grammy Awards for Best Alternative Music Album.) Continuing a trend toward more refined production, they returned to the Top Ten with releases such as 2011’s Codes and Keys (another Grammy nominee for Best Alternative Music Album) and 2015’s Kintsugi (a Best Rock Album nominee). Their tenth studio full-length, Asphalt Meadows, saw release in 2022, 25 years after Gibbard’s breakout cassette.

At Death Cab for Cutie’s inception, Gibbard was an engineering student at Western Washington University who split his time between school and music. Taking a break from his local power pop band, Pinwheel, Gibbard began recording an album’s worth of solo material during the summer of 1997. Producer Chris Walla lent his help to the sessions, which resulted in an eight-song cassette entitled You Can Play These Songs with Chords. When the tape became a local hit, Gibbard reached into his circle of friends to form a band, hoping to play the new songs live. Bassist Nick Harmer (Gibbard’s roommate) and drummer Nathan Good climbed aboard, and Walla was enlisted as the group’s primary guitarist. He would also go on to produce many of the band’s future releases. With a lineup in place, Gibbard’s group rechristened itself Death Cab for Cutie (named after a song by the Bonzo Dog Doo Dah Band) and, within a year’s time, signed a contract with the Seattle-based Barsuk Records.

The quartet made their studio debut with 1998’s Something About Airplanes, an album that featured several re-recorded tracks from the You Can Play These Songs with Chords cassette as well as a dreamy, pop-oriented sound reminiscent of Built to Spill. Gibbard and Walla both continued to pursue their own projects (including Gibbard’s successful stint with the Postal Service), but that didn’t keep Death Cab for Cutie from returning to the studio for a second album, We Have the Facts and We’re Voting Yes, which appeared in 2000. Nathan Good left the group just prior to the album’s completion, and We Have the Facts introduced Michael Schorr as Death Cab’s new drummer. The Forbidden Love EP arrived that same year, while a third full-length effort, The Photo Album, was released in 2001. By this time, a sizable audience had gathered around the band’s emotional music, and Barsuk re-released You Can Play These Songs with Chords in 2002 with ten additional songs.

The polished, hook-laden Transatlanticism arrived in 2003 and announced the arrival of drummer Jason McGerr, who had previously played in a band with Nick Harmer before Death Cab’s formation. The album also proved to be a very important step in the band’s career, gathering positive attention from consumers and industry execs (including television producer Josh Schwartz, who prominently featured the group’s music throughout several seasons of The O.C.). It marked their debut on the Billboard 200, reaching number 97. With their popularity growing, the bandmates issued a live disc, The John Byrd E.P., and later signed a worldwide major-label deal with Atlantic Records in November 2004.

Plans was released the following August and debuted at number four, remaining on the Billboard charts for nearly one year and achieving platinum status on the strength of three singles, including the acoustic ballad “I Will Follow You into the Dark.” Death Cab for Cutie graced the cover of Spin magazine, appeared on an episode of Saturday Night Live, and earned a Grammy nomination for their major-label debut. Work on a follow-up album coincided with the release of Chris Walla’s solo effort Field Manual, and Death Cab returned in May 2008 with Narrow Stairs, a darker set that debuted at the top of the Billboard 200 and also charted internationally. The band proceeded to tour throughout the remainder of the year, while a deluxe version of Something About Airplanes (which was packaged with a recording of their very first show in Seattle) was released in November to introduce newer fans to Death Cab’s early material.

The band continued touring throughout the first half of 2009, visiting Japan and Australia as well as an additional slew of American venues. The Open Door EP arrived that April, featuring several scrapped songs from the Narrow Stairs sessions and a demo version of “Talking Bird.” The guys incorporated some of those songs into their live sets, all the while preparing to return to the studio after the tour’s completion. After a short hiatus, they reconvened for 2011’s Codes and Keys, which found them relying less on the electric guitar and more on moody, Cure-inspired song textures. The single “You Are a Tourist” performed well on the rock and alternative charts, and the album peaked at number three in the U.S. Later in 2011, Death Cab released an EP of remixes of songs from the album titled Keys and Codes Remix EP.

Touring consumed much of 2012, although Gibbard found time to record and release Former Lives, his first official solo album. The band began recording in earnest for their eighth studio album in October 2013. Midway through the following year, however, Walla announced that he was departing the band prior to its completion. Appearing in April 2015, it was named Kintsugi after the Japanese art of repairing broken pottery. Recorded for the first time with an outside producer (Rich Costey), it also marked a return to their core guitar-driven sound after the keyboard-led experiments of its predecessor. Guitarist/keyboardists Dave Depper and Zac Rae joined the group to tour in support of the album and became official members for the recording of Thank You for Today. Released in August 2018, it welcomed Costey back as producer. Thank You for Today debuted at 13 on the Billboard Top 200 upon its release.

A year later, the band unveiled The Blue EP, a five-song set that included the single “Kids in ’99.” In late 2020, Death Cab recorded a benefit EP of covers by Georgia-bred artists like R.E.M., Cat Power, and TLC. Released in December, proceeds from the Georgia EP went to Democratic politician Stacey Abrams’ voter rights organization Fair Fight Action. A 20th anniversary reissue of The Photo Album followed in October 2021, featuring demos, outtakes, and other rarities. Around that time, they ended an 18-month break from live performance with shows with Perfume Genius and Deep Sea Diver.